As you know, I’m a sucker for blind box figurines, especially when they’re in a fandom that I care about. So when I heard that Illusive Comics had the new Funko Game of Thrones Mystery Mini figures in stock, I grabbed my officemate (and GoT superfan) to sag a few boxes. We ended up challenging each other to a blind box battle, to see who could get the coolest and/or rarest figure.

We both ended up getting common figures (2/24 rarity) and they weren’t anything stellar. I think Ryan has the advantage becuase he got two cool guys with swords, while I ended up with a direwolf and dragon.

In case you were wondering, here’s the scale comparison of the Funko Mystery Mini figures to their Funko Pop! Vinyl counterparts – using Jon Snow was the example. I love the minimalism and scale of the Pop! figures, however I like the expressiveness of some of the Mini figurines. I’m not a fan of their “Baby Stewie” heads, however. 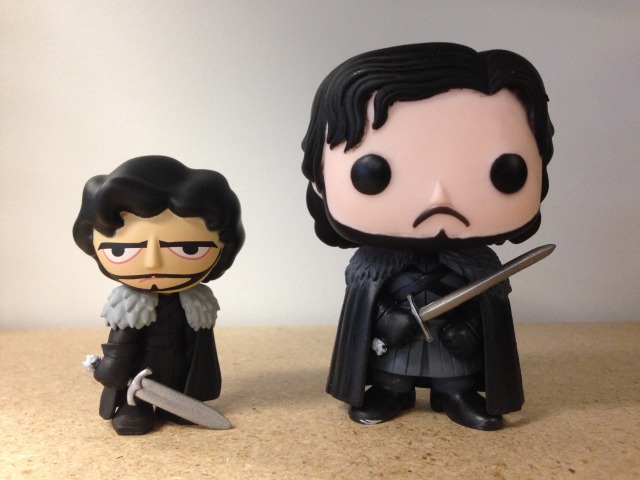 The battle rages on, or at least the video unboxing will. Ryan sprung for an ENTIRE CASE of these, and I’ll be capturing all the drama and he tears into each box.