My Twin Peaks experience at SDCC 17 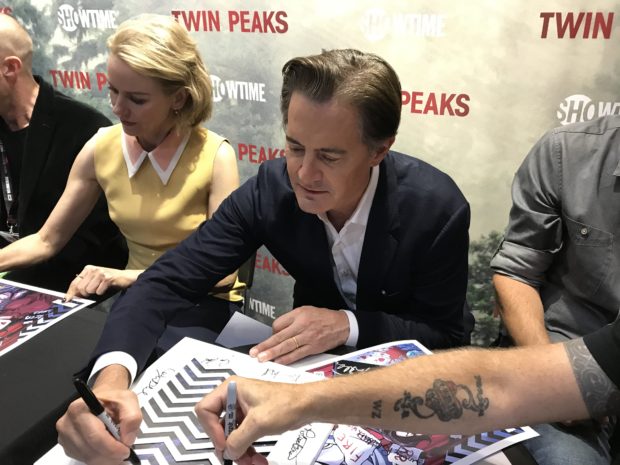 Twin Peaks: The Return is in full swing, so I went to San Diego Comic-Con International with a little more anticipation than normal, knowing that I’ll have access to exclusive merchandise and possibly a chance encounter with a cast member.

The Entertainment Earth booth was advertising a meet and greet, but the cast list was unconfirmed. What was also unconfirmed was whether or not I was in line for the event. You had to sign up via a website, and then hope to be one of the lucky, semi-random people chosen.

As it turns out, I signed up early enough and was given access to the line, and found myself around 30 people away from the front – not bad! The wait was around an hour. In front of me was a Russian model, whose name I can no longer remember well enough to pronounce (Itnakyia, maybe?). She knew nothing about Twin Peaks, but was hoping this might be a good opportunity to network with Hollywood-types. Behind me were several really nice people, just hoping to get some cool photographs or selfies.

Everyone was pretty excited, knowing that we would have a chance to meet a few of the stars, like Kimmy Robertson (Lucy) and James Marshall (James). However that minor excitement was quickly replaced with full-on insanity when we realized that there were like a dozen cast members, including Tim Roth, Naomi Watts, and KYLE McLAUGHLIN! Matthew Lillard ran along the line, giving everyone high fives as we slowly began to shamble forward, while collectively fighting off passersby that tired to jump into line with us.

My small line group was finally put into the line-up and started chatting up the cast of Twin Peaks, which seemed so surreal. Itnakyia was handing out biz cards and really pressing some of the actors, which gave me time plenty of time to snag autographs on my Josh Howard poster and snap some pics. Everyone was super friendly, especially Naomi Watts, she was just delightful.

As I moved down the end of the line towards Kyle McLaughlin, I heard the handler tell them that it’s time to go, and I knew that I had like 2 minutes to get a photo. Just when it was my turn to get a pic with him, Itnakyia insisted that I take a photo of her. I snapped the photo and then handed her my iPhone, so she could return the favor, but she walked off. The cool guy behind me saw the snub and quickly, snatched my camera to talk a photo. Tim Roth and Matthew Lillard were already getting up from the table, so I asked Kyle McLaughin and asked if we could take a photo – he kindly obliged.

I stood next to Kyle, he leaned in and smiled, and just before the photo was taken, two weirdos stepped in the way.! Apparently they had camped out for like 15 hours to see the Twin Peaks panel, and somehow talked their way up to meeting Kyle McLaughlin. They just shoved me out of the way, and UNLOADED on him about how they’re huge fans and what not.

The event staff allowed me to linger for a moment, but the handler came back up and took Kyle and some of the cast members away. The moment had passed.

The weirdos turned to me and were all excited about how they couldn’t believe that their dream came true. I wish I could tell you that I wasn’t petty and that I just smiled and walked away. Not quite. I kindly let them know that I was the collateral damage of their fucking nerd rampage and they should go celebrate somewhere else.

I couldn’t be to outraged though, none of this fandom stuff is super important. I still had a fantastic time, and it’s just another example of the weird, magical things that happen to me at every SDCC.

Farewell to my friend and neighbor, Tom Sanders
My nerd loot from SDCC 17