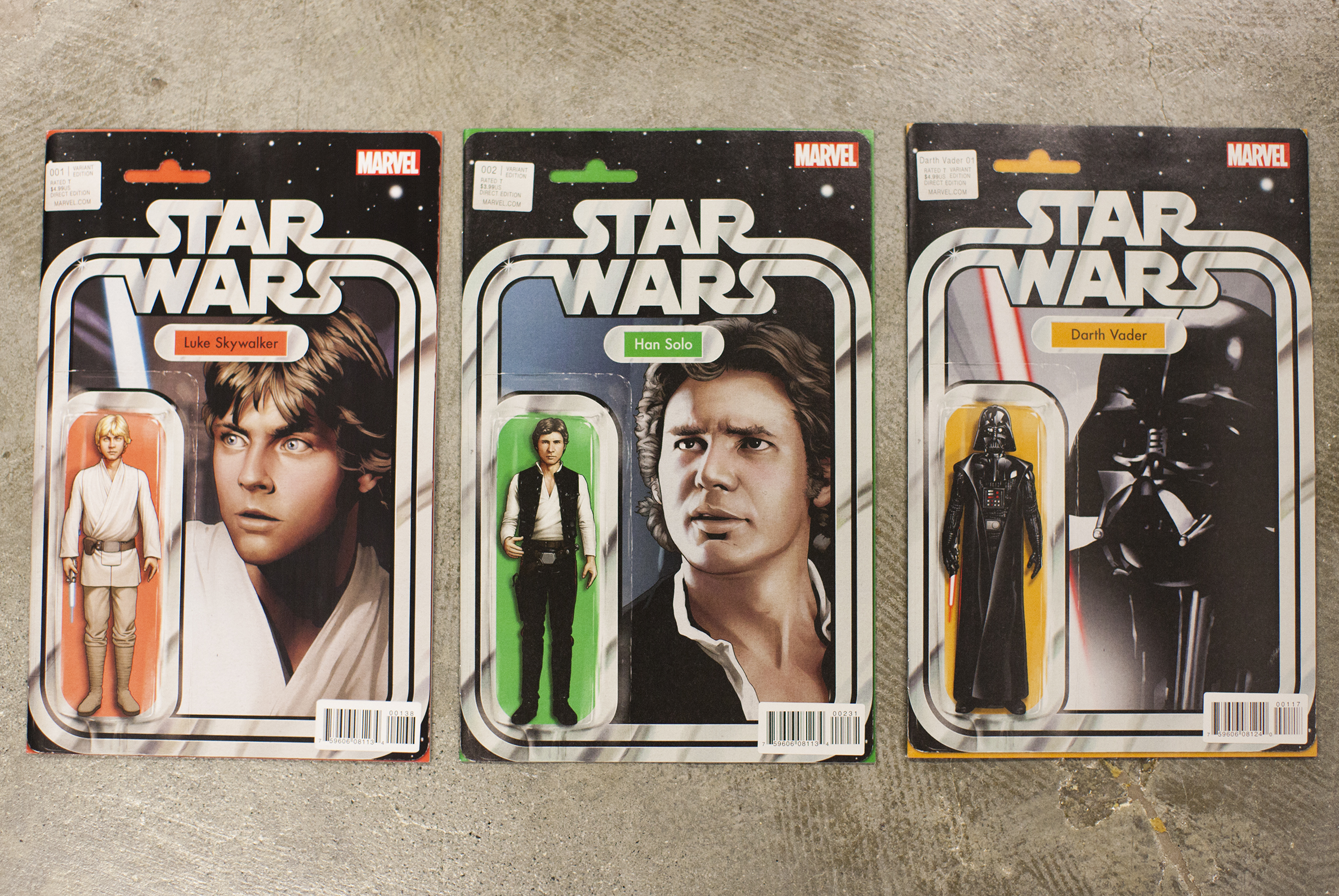 A long time ago in a comic shop not to far away, I snagged the first issue of Marvel’s new Star Wars comic book like just about everyone else in the known universe. There were over fifty variant covers, but there was no way I’m getting caught up in any of that. Though I did have a moment of weakness over the Hasbro action figure variant with Luke Skywalker on the cover. It was pretty rad, but I didn’t budge, stating that “it wasn’t really my thing.”

(Spoiler: It turns out to totally be my thing.)

I have a bad feeling about this.

Flash forward a month to the release of issue #2, and – sure enough – there’s a Han Solo action figure variant. Standing in front of the new release wall I lament, “So this is going to be a thing now?” There was a moment where I almost bought it. However, since I didn’t get the last one I figured it was too late. And it’s not like I’m in need of new things to hoard.

One week later and I’m staring at Darth Vader #1 and it’s glorious variant cover. If you guessed that I fucking snapped, then you would be correct. “How bad do I want these now?!” I remember yelling out loud, or at least in my head.

The force is strong with this one.

It turns out that the comic shop still had last week’s Hand Solo variant, and I was able to buy the Luke Skywalker issue off Amazon for only a few bucks. I’ve added the variants to my pull list, and it’ll be interesting to see how long i can keep up with them. I heard that they’re retailer incentives, so if they don’t order or sell a certain number of issues, they won’t get that cover version.

Regardless, I’m in the game now. Can’t wait to add Princess Leia #1 and Obi-Wan Kenobi from Star War #3! I’ll update as they arrive. 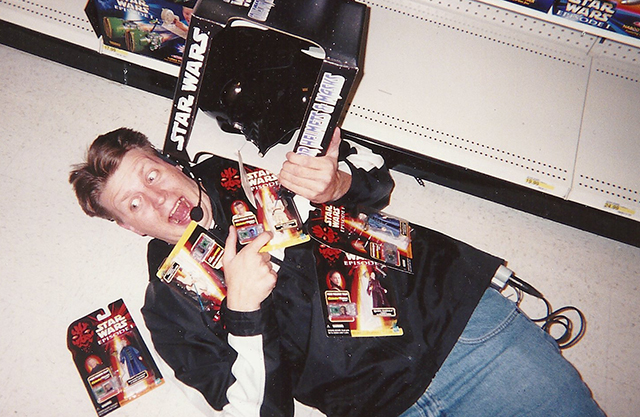 Here’s a somewhat embarrassing photo from 1999, just a few weeks before the eagerly-anticipated Star Wars: The Phantom Menace premiered in theaters. I was a TV news photographer and we were doing a live remote from a local Target store which just received the first shipment of Phantom Menace toys. I was overjoyed to be among the first nerds to be handling the figures. Looking back now, it’s kinda weird to me that this photo was even taken, considering that it wasn’t immediately going up on Facebook or Instagram. Posterity, I suppose.

Now mind you, I wasn’t allowed to purchase any of these figures. There was a hard street date release on these toys, and this Target wasn’t going to be open until 9am. Luckily, I had a backup plan. I hauled-ass back to work, parked my live truck, and then raced to the nearby Toys R’ Us, which happened to be holding a midnight release party.

Actually, it wasn’t so much a release party, as it was an opportunity for a mob of unruly toy collectors to trample each other in order to get a JarJar Binks action figure. I rolled up on the scene, where a line stretched around the store and met-up with my buddies from The WB, who got me in the store, just ahead of the line. The clock struck midnight, the doors flung open, and then it was complete mayhem for the next hour as all the Star Wars displays were stripped bare. I managed to snatch up a full set of action figures and went home deliriously happy.

The next morning in the clear light of day – I recall glancing over the figures thinking, “I reallydon’t think I’m that into this Star Wars movie” and returned all but Darth Maul to the store. The Force was definitely strong with me that day.