list of names for my future indie rock band 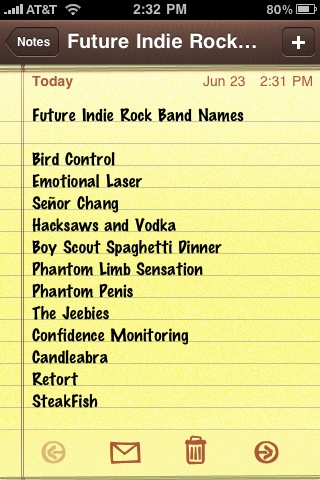 The chance of me actually starting a band is unlikely, since I really don’t play any instruments, apart from depeche-mode’n around on the keyboard. And while I tear up the stage at karaoke, I can’t really sing. It’s all smoke and mirrors.

But, I like to keep the dream alive by updating my list of possible names for my future indie rock-electro band. Here’s the list I have currently loaded in my iPhone notes application. My friend Audio (the editor of Android Delight – which would be another wicked-cool band name!) said that “the closest we’ll ever get to forming a band will be on Xbox Live in Rock Band.” Yeah, he’s probably right. Maybe it’s a good time to finally start the search for Emotional Laser’s new drummer.