Here’s a quick list of things that caught my attention this morning while cruising the web before work:

1Top 10 Ironic Ads from History – This Consumerist article has some awesome items on the list, including a James Dean safe driving PSA and an advertisement about wrapping toddlers in cellophane.

2Better on the Other Side – Saw a segment on HLN this morning about how The Game and his colleagues threw together a tribute song to Michael Jackson (complete with music video) in 15 hours after the singer’s death. The song/video are decent, but I really liked the whole behind-the-scenes aspect of why and how they all got it done. I’m trying to find that video right now.

3Best Buy to Start Selling Green Vehicles – According to the WSJ, my favorite big box chain is about to start selling “green machines” in their stores. Stuff like Segways, scooters, and the like. Not sure how effective this will be, but anything has got to be better than going to a car dealership these days. Also, my bother once went to the mall to buy a compact disc and came home with a $14,000 truck, so maybe impulse buyers might be more likely to glide away on a Segway. The best part of this story: They’re starting it in PDX, naturally.

4District 9 – I haven’t heard much buzz about it, but I’m crazy obsessed with seeing District 9 when it comes out later this summer. I had to sit through several of those “commercials before the movies” things this weekend when I did my all day movie surfing extravaganza, and I saw numerous new clips of D9. Now I’ll see just about anything with aliens and robots blowing shit up, but the fact that it’s directed by Halo: Landfall‘ s Neill Blomkamp has made me rabid for this film’s release. 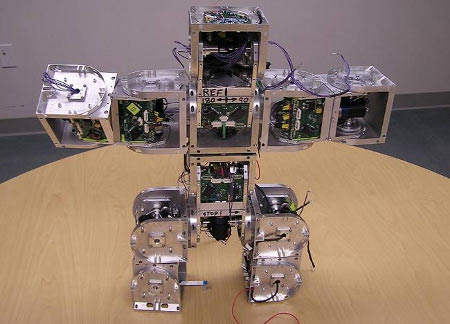 5Transformer Robot Really Transforms – Here’s the obligatory robot post in this list. It’s an underwhelming NASA/USC transforming robot, called Superbot, designed to someday murder humans and all their offspring ‘morph’ on lunar and mars missions to better traverse the landscape. Geekologie stated it best with: “…the only good Transformers are the first generation toys. And only in their packaging.” This robot seems kinda primitive, but I think once Skynet is up and running next year, we’ll see some major advances in robot technology.

Got any billboards?
we'll get through this together