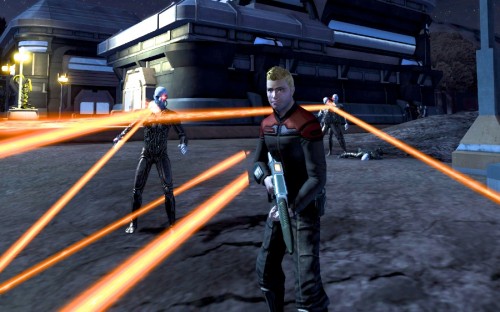 It's like the Alamo! This time with the Borg.

Here’s a hurried screenshot I snapped from my away team adventure in Star Trek Online, moments before I was overrun by Borg invaders from south of the neutral zone. I tell ya, they never let a fella just take vanity photos of himself. My character is a rough-n-tumble guy named Captain Dallas Austin Houston, which is quite convenient since I just landed the command position of the U.S.S. San Antonio. I have an annoying way of talking like a hick Southern gentleman on open comm channels, yet I’m always willing to help take care of a Klingon stampede when those fancy Starfleet cityfolk need a hand.
Tweet I’m going to come right out and say this: I’ve spent real life money to buy virtual cash. That’s something that many MMO gamers will undoubtedly frown upon, yet I have no problem openly admitting to my sudden infusion of “dirty gold” several years ago.

Now, I understand all of the arguments against buying virtual currency. How it inflates the fragile in-game economy, or that players are profiting from something for which they don’t own the intellectual property rights. There’s the issue of Chinese workers earning pennies a day playing World of Warcraft, so that fat, American gamers can buy virtual gold pieces from their tyrannical employers. I’m quite familiar with those arguments, though the line I most commonly hear from people opposed to the gold trade is, “I’d rather earn my rewards than spending money to get ahead.”

Luckily, I’m absolved of some guilt by the fact that when I bought my money, the practice was still relatively new. Foreign competitors hadn’t yet jumped into the game, and I ended up striking a deal with a nineteen year-old kid from Eastern Oregon who was paying his way through college. Also, the economy on my EverQuest server (Saryrn) was wrecked well before I got greedy and decided I wanted a fancy, new sword to hang from my belt.

That’s what it came down to, really: I wanted a new sword – one that didn’t always, tragically suck – and I didn’t want to have to run around skinning virtual rats to earn it. You tell me what’s worse. Is it spending hours online in a game, but rather than doing fun stuff like killing unicorns with friends, you’re knitting magical pants or collecting skeleton bones to make a living? Or is it working at a real job all day, earning real money, from which you take a very small fraction to buy gold pieces with? Okay, they both sound kind of ridiculous when you think about it.

I didn’t have the Wurmslayer sword, but I did have the mighty Paypal account. All it took was a few minutes to purchase the gold off an auction site, and then make arrangements to meet my supplier in a dark, Norrathian alley somewhere. Actually, we ended up meeting in a crowded bank. Apparently, 5000 platinum pieces weighs more than a character can physically carry, so we did our exchange, right out in the open. I nervously tried to make small talk as he offloaded the dirty money, but he (in the form of a red haired Barbarian warrior) would have none of it. Moments later, I bought my ridiculous sword (and later a fancy helmet) and went on with my lives, both online and off.

It was probably wrong, but I don’t care. It helped me get more quality time in the game with my friends, while showing-off a shiny, new weapon that I had no reasonable excuse for suddenly owning. Heck, for all I know I helped some poor dude unload some overpriced cutlery he had been trying to auction for months. And with that sword, my young, Half-Elf Bard was able to have numerous heroic adventures, vanquishing the scourge of evil from the land and saving countless virtual lives along the way.

I’ve decided to do a weekly column “MMOmance”, uncovering all the screwed-up things I’ve done while playing these MMORPG games that I’m so infatuated with. Next week’s MMOmance:” I pretended to be a girl in real life.”