This past weekend, I packed up my Xbox 360 and an LCD monitor, and cruised over to a coworkers house for a night of playing Modern Warfare 2 with “the guys”. (I don’t really have my own “the guys” but for the sake of this post, we’ll sort of pretend that I do.) I learned two harsh realities that evening, the first being that you can’t system link Call of Duty for a house full of dudes, as the game only permits single player xbox link-ups. Lame. 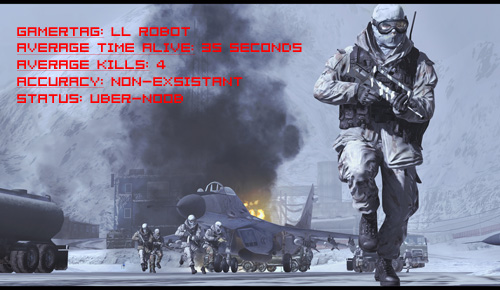 The second thing I learned was that I’ll probably always be a noob when it comes to playing MW2 and online first-person shooters. These are the main five reasons:

1.I don’t spend enough time practicing online. Seems rather obvious, right? My problem: I had to get over the reasoning that simply because I played a lot of first-person shooter games, I should be good at any of them, in any setting. It’s sorta like a bunch of nerds playing D&D or World of Warcraft and assuming they’d have have a chance against an Orc, if they were to suddenly face one in real life. That’s not to say that all of my single player skills are wasted, at the very least they taught me how to move and aim.

2.Simply moving and aiming is not good enough. To survive in the fast-paced world on online warfare you need to MOVE! and AIM! But, you also need to know when to stay put and wait. My problem: I’m always in one place too long, or not long enough. And I really don’t have the finesse that it takes to be a killing machine. When watching the playback of my murder on the killcam, I’m amazed at the twitchy and jerky movement of my opponents. They move like a brutal, killing insect while I seem to really take my time aiming and lining up the shot. Much like my golf swing, I’ve been practicing mostly bad habits.

3.This isn’t my story and I’m not the hero. The problem with playing so many co-op or single player campaigns is that you tend to believe that you’re special. Enemy troops always rush at you from convenient locations in a perfectly timed rhythm. You should know your objectives and which way you should be moving on the map. This is all flipped upside-down in multiplayer. The maps are closed and death is your only exit. Players don’t come at you in a linear way, but punish you sideways with all sorts of inventive maneuvering. My problem: I tend to be to too cinematic. I picture myself running about, taking down enemies with the help of my friendly comrades and everything I do is part of some sort of blockbuster action sequence. When in reality, the better players aren’t even thinking, but rather moving, shooting, moving, grenade, explode, die, respawn, moving, shooting…

4.I don’t know the maps. And to be honest, I’ll never know the maps. I just know the places that I always die on the maps. My friends try to show me the prime spots to hang out and snipe at people, but when I finally get up into the roost someone is already there, ready to rock my face with a shotgun. My most successful moments are when I find a decent location, and can keep dropping enemies as they come through my bottlenecked area until I get stabbed in the back by a ninja person or humped by a guy holding a riot shield.

5.I’m a bit of a carebear. That’s gamerspeak for, “pussy”. Although if you play shooters on Xbox Live for any amount of time, you’ll realize that is one of the milder terms of endearment. My problem: I just like having fun, casually shooting at people. I don’t have the heart (nor skill) to constantly be at the enemy spawn point machine-gun raping the same guy over and over again. (Because usually, I’m the guy respawning.) I suppose that’s why I’m making this list. Not to make excuses, but rather to embrace my noobness and try learn from it…one horrible agonizing death at a time.