Thank you, Graebel, for breaking our stuff.

When the moving truck arrived in front of our Florida home, I felt somewhat relieved. Moving companies usually give you a window – in this case two days – of when you can expect your stuff to arrive. For our relocation, they couldn’t confirm the final arrival dates, nor did they actually make it to our house when they originally projected they would. But at this point, we had already come to expect this sort of customer service from Graebel. 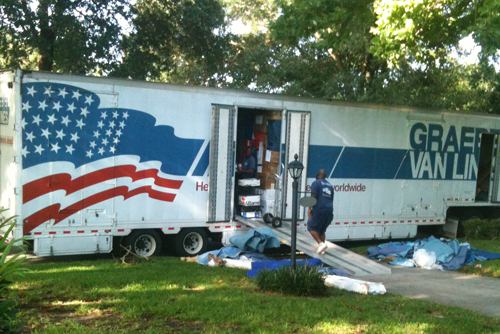 They seemed to always put the fragile stuff at the bottom.

We’ve made several cross-country moves over the years, but had never heard of Graebel until our boss recommended that we get a quote from them. When their sales representative, Courtney, came out to our Houston apartment, she was friendly and professional. Her quote even came in more accurate and affordable than any of the other two companies we considered. Within the next few weeks, we had signed the paper work and arranged a date for them to pick up our stuff. At this point, communication from the company became as reliable as my iPhone’s AT&T cell service; it’s never available when you need it. Other moving companies would call and email up before each stage of the move, making sure we’re ready and always”in the loop.” Not Graebel. As a matter of fact, we didn’t even get our friendly, “How To Prepare For Your Move” email from them until moments before the last few boxes went onto the moving van that day.
Now, mind you, this was the third truck they sent to our house that day. On the morning of our move, the driver showed up with the wrong truck (a logistical problem they forgot to account for) and the crew had to stand around for an hour while he drove back across Houston in morning rush hour traffic to get another vehicle. The rest of the day the work crew worked their asses off, loading up our apartment. That was until the driver had to go back across town for another van to fit everything. One of the Graebel people returned my call from earlier that morning, and she was quite apologetic. I did mention that adding the additional shuttle vans wasn’t part of the plan and we shouldn’t be billed for their mistake. She countered with, “But you’re not paying for it” which made me annoyed, because I don’t want to have to go back to my new employer with additional, padded costs.
END_OF_DOCUMENT_TOKEN_TO_BE_REPLACED
Tweet